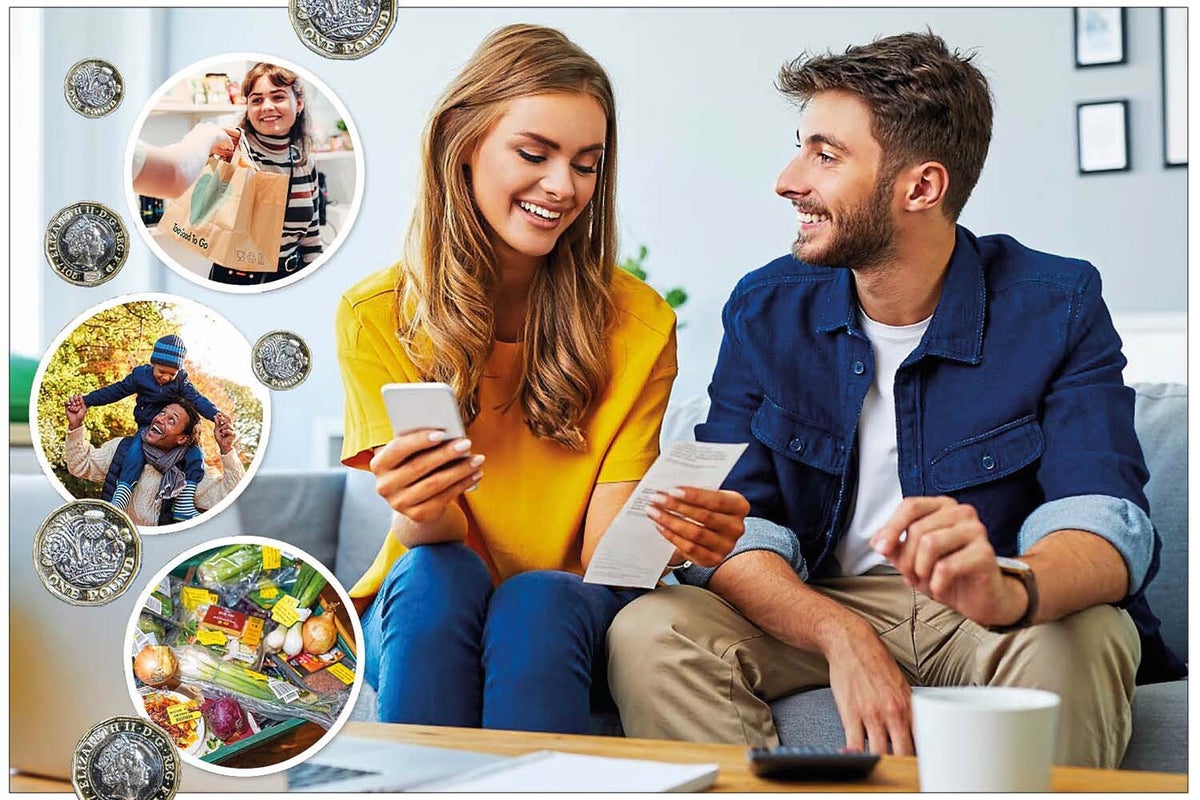 There’s no chance of getting away from it: the cost of living is in an alarming upward spiral.

With inflation at more than 10 per cent, energy bills going up by the thousands, and little being done about it — political sound bites are yet to translate into anything substantial — it’s time to do more than cut back on the avocado toast to spare some cash, especially if you’re a first-time saver.

Here’s how to recession-proof your life — or at least make a start.

“Sometimes, healthy competition can be a great method of motivating yourself” says Mat Megens, founder of money-saving platform HyperJar. “Try to do the 52-week challenge, where you save one pound the first week, two pounds the second, three pounds the third and so on. After a year, you end up with ­£1,378.“

Another way to save, says Phoebe Ellis of Thrive Money, is to resist the urge for instant gratification. “If you see something you like, really think about it. Do I need this? Do I have something like this? Give yourself two weeks. If you’re no longer interested, then you can thank yourself for not giving in to the purchase.”

Good budgeting comes down to knowing what you’re spending. Many banking apps offer helpful instant alerts, while others help you track spending, including Emma or Plum.

Megens says apps such as his “show a complete breakdown of your purchases according to category, merchant, and savings, so you will always be on top of your spending.”

“Make sure you review your budget regularly, and not to be too hard on yourself. It takes time to change your habits with spending and any step you take towards healthier financial practices is a step in the right direction.”

“In terms of mortgages, there isn’t really an easy way to save money,” says property expert Jason Orme. “But in the medium to long term, my advice would be to seriously consider fixing now while the remaining cheap fixed rate deals are still around.

“The best tip in terms of saving money over the lifetime of your mortgage is to overpay. This significantly reduces the amount of interest you’ll pay overall and allows you to drive down the full amount owed much more quickly. It’s easier said than done at the minute, but the other benefit is that it reduces your loan to value quicker – meaning that if you can get to a lower loan to value (under 60 per cent), then you can qualify for the lower-interest deals down the line.”

Siobhan Holbrook, founder of Mortgage Light brokerage, says: “Could you explore sub-letting a room in your home to make extra cash? You could even end up splitting the cost of food shops.”

Research by insurance company So-Sure found that households could save a whopping £147 a year just by switching unused electronic devices off at the mains, instead of leaving them on standby. “The simple act of turning off ‘vampire devices’ (devices that drain energy even when not switched on) could make some very useful savings year on year,” a spokesperson for the company said. “Almost all electrical devices can be turned off at the mains without affecting their programming but check beforehand if you are concerned.”

So what to look out for? The obvious is phone chargers that are plugged in but not in use, but the things draining rather more cash are the likes of hi-fi systems on standby and laptop chargers.

Have a clear out

With inflation on the up, every little counts — especially if that little is just sitting around your flat taking up space. Download the likes of Depop, Vinted, Hardly Ever Worn It and more to get selling your second-hand clothes and accessories. A full list of easy-to-use apps to quickly shift your unloved stuff can be found at standard.co.uk/escapist.

Figures from the Office for National Statistics show that the cost of food and drink has gone up almost seven per cent year-on-year as of April 2022. Almost everything has risen, perhaps most notably pasta prices which rose 50 per cent between April 2021 and April 2022. And so, with the weekly shop, less is more, says Anita Naik, a savings expert at Voucher Codes. “Supermarkets are cleverly designed to make shoppers stay as long as possible when shopping,” she says. “Just to get you to spend more money.”

The longer shoppers spend in store, the more likely they are to make bad decisions, Naik adds: “Research shows that our decision-making becomes more emotional and impulsive after a specific time spent shopping. After 40 minutes — the time of an average weekly shop — the brain gets fatigued and stops thinking rationally about what to buy.”

The best way to counteract this is to make your shop swift and stick firmly to the shopping list. According to a survey from Tesco, shoppers pay an extra £128.61 each month for unplanned items, and only around a third of people stick to their shopping list.

Naik also recommends shopping sometime after 7pm, which is when places mark down products that are coming close to their sell-by date. These items are still completely edible — and if you’re not going to use them straight away, freeze them.

Author of Save Yourself Happy, Gemma Bird — better known to her 294,000 Instagram followers as Money Mum — relies on her freezer to feed her family both well and inexpensively. “Stock up on frozen veg; it’s cheaper than fresh veg, and there’s zero waste,” she advises. Expect to pay around £1.57 for fresh broccoli but only 86p for the same amount frozen. “If you have a small family, just grab what you need and get a clip for the freezer bags to keep the rest fresh,” says Bird. “Bonus: if your fridge is full, it’s actually better – empty freezers cost more to run.”

It’s not just veg, she adds. “Fresh fruit doesn’t have to equal big waste. Freeze it — a quick Google will tell you which fruits don’t freeze well. And bread that’s been frozen will defrost within the hour – perfect for toast and sandwiches.”

Food writer Lucy Antal is a big believer in batch-cooking, which avoids waste, saves energy – you’re only cooking once for two or more meals – and saves time too. Besides, with meals to hand, it should cut the costly temptation of takeaway.

Antal’s staples include a riff on ragu which, she says, “can be used for pasta or in tacos and so on. I make a beef stew that can be tweaked with the addition of mushrooms, mustard and sour cream or have chilli, peppers and beans.”

She also advises always taking stock of what you already have in before going out to buy more. “Use everything,” she says. “Stale bread, chicken bones, squishy tomatoes. Check the fridge, freezer and cupboards before shopping and make a plan.”

Environmental charity Hubbub says that getting a slow cooker is one of the best ways to reduce your energy usage. “Slow cookers are one of the most energy efficient kitchen appliances — they use just a little more energy than a traditional light bulb,” a spokesperson told the Standard.

Katie Binns of personal finance site The Money Edit says there are plenty of ways to enjoy yourself for less. If you love live music, she recommends getting on the right mailing lists or stewarding at festivals.

“The BBC mailing list offers free concerts around the UK, including Later…with Jools Holland, Radio 1 gigs and BBC Orchestra performances,” says Binns. “Stewarding at music festivals like Glastonbury and Reading via organisations like Oxfam doesn’t pay but offers either a free ticket or free time in exchange for a set number of shifts, plus meals.

“For free culture, sign up to SRO Audiences for free tickets to shows like Live at the Apollo, The Graham Norton Show, The Great British Bake-Off after-show and Countdown while My Box Office offers free or discounted tickets to dance, comedy, opera and even sports events.”

“Being outside is not only good for your health but it’s good for your wallet as well, as most outdoor activities, such as walking, cycling or camping are free or relatively cheap,” says head of savings at Atom bank, Aileen Robertson. “Remember to pack your own lunch and take your own drinks to save splashing out at a cafe.”

Drink for free and eat out for cheap

With drinking in London so pricey, it’s worth having the Dusk app, which gives users one free drink per day at bars and restaurants across the country. In London, the likes of Bar Elba, the Dalston Roof Park and the Simmons chain have all been involved. For cheap meals, there’s another app to have. Try Too Good To Go offers leftover meals from restaurants for as little as £2.

Otherwise, it’s about keeping a close eye on your emails. “If you love eating out, sign up to your favourite restaurants’ mailing lists for occasional offers that include up to 50 per off deals,” says Binn.

Couple share how they tripled their savings and bought a home in lockdown – Metro.co.uk